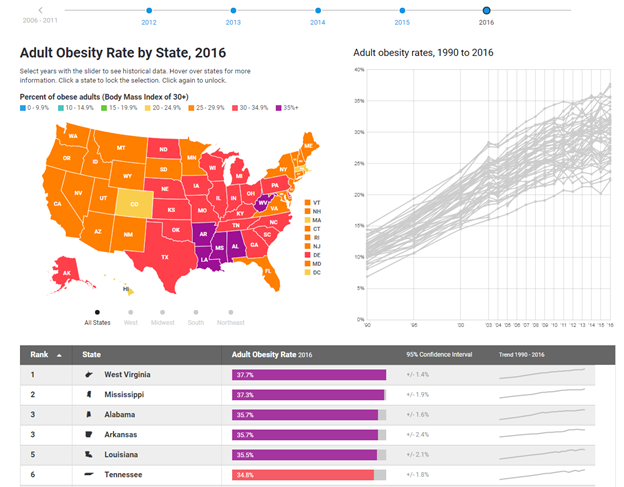 For our next challenge we will be exploring Adult Obesity in the United States data from 2017/Week 41 of the Makeover Monday Challenge. Consider what does and does not work well with the original visual, and how you might improve the visual. The goal of the challenge is to renovate the visual. This could mean improving the visual, or revealing a different story. Participants may use Tableau or any other data visualization tool (Excel, SAS, R..) to create their visual. Here is a link to the data set, from the CDC, and original visual from https://stateofobesity.org/adult-obesity/.

Makeovers will be discussed at the monthly TUG meeting.

The challenge winner, selected by random drawing, will be announced at the monthly TUG meeting. The winner can choose any book from Amazon about data or visualization up to $100!

Submit your entry by responding to this discussion. You may submit as many visuals as you like. Each participant will only be entered into the drawing once. You may update your submission at any point. If you have questions/comments while creating your visual, post your questions/comments here!

To ensure your visual is shared at the next TUG, your visual must be posted to this discussion by 5PM EST on October 8th.